by Director of Music - James Baker 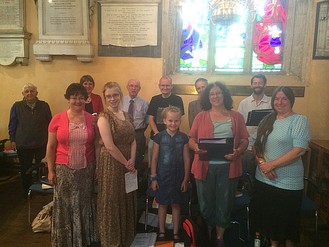 I joined St Mary's as organist and director of music in October 2012 and feel privileged to lead such a friendly, supportive and committed group of Christians in the choir. Our aim is to provide uplifting music that encourages the congregation and reflects the words of the songs.

For special occasions such as Easter and Christmas, there is an extended choir of twenty of more. We are keen to welcome anyone into the choir, whether they can commit to every week like the core choir of ten singers or simply turn up when they are able to. The choir can benefit from full-time and part-time choir members who are able to help lead our worship on Sunday mornings.

The choir meets dressed in casual clothes at 9.15am each Sunday morning for a fast-paced, fun and productive thirty-minute rehearsal ending with prayers for each other before the 10am service. All choir members are encouraged to sing short solos from time to time. 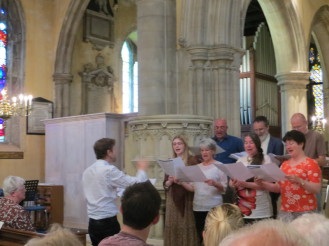 Some of the responses are sung at St Mary's and our choir aims to give a clear lead to the congregation.  If you visit St Mary’s, I do hope you will come and speak to me at the end of the service - come and find me at the pipe organ.  It is always good to meet new people, especially musical people!

I'd be delighted to tell you more about the variety of Christian music we use at St Mary's: we like to hold on to the great traditional hymns with their solid theology and inspirational tunes, whilst at the same time introduce the best of the modern hymns that are often heard on the BBC’s Songs of Praise.  We try to keep the best of the old traditions whilst adopting the best of some of the more modern traditions. 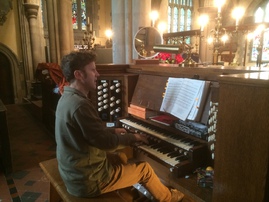 If you are interested in pipe organs, I'd love to tell you about ours: it has over 1250 pipes and is an absolute joy to play.  It was originally built for Vowles for the west gallery in the tower.  The organ was rebuilt and enlarged by Percy Daniel & Co Ltd in the 1950s and moved to its current position in the north side of the chancel, acquiring a detached console and numerous tonal additions.

The organ was overhauled and enlarged by Clevedon Organ Ltd in 2008.  This work included re-wiring and installing solid state transition and capture systems, adding two extra stops and re-leathering the bellows and primary actions.

As church organist, I give an informal, light-hearted organ recital once a year, usually on a Sunday afternoon in mid-June.  My aim is to keep the concert light with an hour’s music of familiar pieces from musicals, television, popular music and the best of the great classics.

Music for weddings at St Mary’s 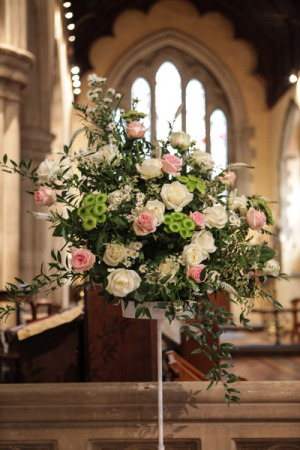 One of the most rewarding roles I have is to provide the music for weddings at St Mary’s.  I like couples to choose exactly what music they want, whether it is traditional, classical, popular, modern, film music or whatever.  I enjoy playing traditional and modern music and can play the great classics on the organ as well as informal music on the piano.  Nothing is too difficult or too unusual - it is their day, so wedding couples may select whatever music they want!

My aim is to make the occasion as happy and joyful as possible and to help the guests relax as they enter the church by playing jolly and familiar music on the wonderful pipe organ.

The choir at weddings

I encourage wedding couples to have the choir at their wedding:  the main advantage of having the choir is that they provide a real boost to the hymn singing during the service.  Many people are not used to singing and the hymns can fall rather flat with just a handful of people joining in, so the choir can be a great help in ensuring that the hymns go down well, encouraging others in the congregation to join in making the occasion most joyful.

There are around ten people in the choir who are usually available to sing at a wedding.  Couples may request music for the choir to sing (popular, classical or traditional - they are versatile!) or they can sing suitable music from their extensive repertoire during the signing of the register.

For more information, please contact James via the office.

We are located at:

Safeguarding supports everything that we do

If you have a concern that you wish to report, please contact whichever of the following you feel is most appropriate.