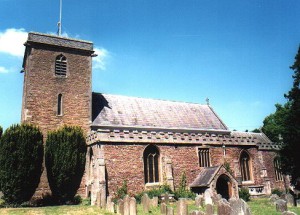 The first church on the site probably dates to around 691–92, when King Æthelred of Mercia made a grant of land to Oftfor, Bishop of Worcester. Around 1093 a charter of another Bishop of Worcester, Wulfstan, endowed the Henbury church and all of its tithes to Westbury on Trym's monastery, which Wulfstan had acquired for the Worcester diocese around that time.

When the monastery became Westbury College around 1194, the area around Henbury became a prebend of the College. The tithes from Henbury provided a revenue for one of the College's canons, who was responsible for providing the vicar for St Mary's. In addition, the Henbury church was the other church, alongside Holy Trinity Church, Westbury on Trym, whose maintenance was a collective responsibility of the college community.

It was around this time that the construction of the present building took place. The nave and lower tower date from around 1200. In the early 13th century the upper tower, chancel and south chapel were added, and the clerestory was built around 1300. These features are in the Early English style, although with some restoration since. Most notable are the Late Norman doorways, which have segmental arches.

Westbury College periodically received supervisory visits from the Worcester diocese, with a bishop's palace in Henbury used as an episcopal residence until the late 15th century. This was situated somewhere close to St Mary's, though its exact location is not certain.

When Westbury College was dissolved in 1544, St Mary's became a parish church of the new Bristol diocese.

In 1836 Thomas Rickman built the north chapel and carried out restoration work, and the church was further restored by George Edmund Street in 1875–77. The 19th-century restorations introduced Perpendicular Gothic Revival style features, in particular the windows for the nave and the chapels.

In the churchyard there is a mortuary chapel which was built around 1830, and may also have been designed by Rickman. It is in the Early English Gothic Revival style and has been designated by English Heritage as grade II listed.

Originally the centre of a rural parish, the church developed during the 18th century to also serve the estates of Henbury and kings Weston and the large houses of Bristol merchants who enjoyed the country atmosphere. Over the years the church's position in the heart of Henbury village has made it the centre for worship and focus of community life in the parish, of crucial importance particularly in the last century during two World wars, and the subsequent changes that have come to Henbury. Today the parish includes the districts of Henbury, Brentry and hallen as well as most of the Blaise Castle estate and the Mall Shopping Centre at Cribbs Causeway. 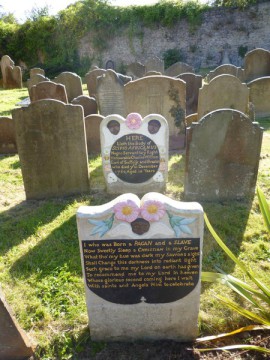 THE GRAVE OF SCIPIO AFRICANUS

The slave known as Scipio Africanus is buried in the churchyard in a grave with elaborately painted headstone and footstone, dated 1720. Very little is known of his life. He was the servant of Charles William Howard, 7th Earl of Suffolk, who in 1715 married Arabella Morse and lived in the "Great House" in Henbury, Bristol. It is not known how he was acquired, but he died there aged, according to his headstone, eighteen. His master and mistress would die two years later.

He is remembered because of the elaborate grave, consisting of painted headstone and footstone, in the churchyard of St Mary's in Henbury, which is a grade II * listed building. Both stones feature black cherubs and the footstone bears the unusual epitaph:

I who was Born a PAGAN and a SLAVE

Now sweetly sleep a CHRISTIAN in my Grave

What tho' my hue was dark my SAVIOR'S sight

Shall Change this darkness into radiant Light

Such grace to me my Lord on earth has given

To recommend me to my Lord in heaven

With saints and Angels him to celebrate

It is thought that 10,000 black slaves and servants were in Britain in the early 18th century, but this is one of the very few memorials to them. Curiously, there is no record of his burial in the church registers. 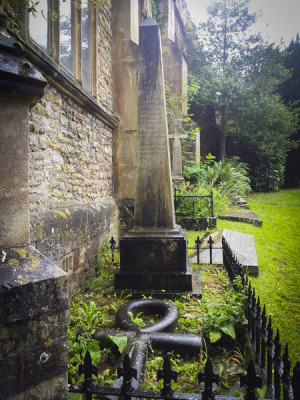 The churchyard also contains an obelisk with a stone ankh, marking the grave of the Egyptologist Amelia Edwards. Born in London to an Irish mother and a father who had been a British Army officer before becoming a banker, Edwards was educated at home by her mother, showing considerable promise as a writer at a young age. She published her first poem at the age of 7, her first story at age 12. Edwards thereafter proceeded to publish a variety of poetry, stories and articles in a large number of magazines including Chamber's Journal, Household Words and All the Year Round. She also wrote for the Saturday Review and the Morning Post.

Edwards' first full-length novel was My Brother's Wife (1855). Her early novels were well received, but it was Barbara's History (1864), a novel of bigamy, that solidly established her reputation as a novelist. She spent considerable time and effort on their settings and backgrounds, estimating that it took her about two years to complete the researching and writing of each. This painstaking work paid off when her last novel, Lord Brackenbury (1880), emerged as a run-away success that went to 15 editions. Edwards wrote several ghost stories, including the often anthologised "The Phantom Coach" (1864).

In the winter of 1873–1874, accompanied by several friends, Edwards toured Egypt, discovering a fascination with the land and its cultures, both ancient and modern. Journeying southwards from Cairo in a hired dahabiyeh (manned houseboat), the companions visited Philae and ultimately reached Abu Simbel where they remained for six weeks. During this last period, a member of Edwards' party, the English painter Andrew McCallum, discovered a previously unknown sanctuary that bore her name for some time afterwards.

Having once returned to the UK, Edwards proceeded to write a vivid description of her Nile voyage, publishing the resulting book in 1877 under the title of A Thousand Miles up the Nile. Enhanced with her own hand-drawn illustrations, the travelogue became an immediate bestseller.

Edwards' travels in Egypt had made her aware of the increasing threat directed towards the ancient monuments by tourism and modern development. Determined to stem these threats by the force of public awareness and scientific endeavour, Edwards became a tireless public advocate for the research and preservation of the ancient monuments and, in 1882, co-founded the Egypt Exploration Fund (now the Egypt Exploration Society) with Reginald Stuart Poole, curator of the Department of Coins and Medals at the British Museum. Edwards was to serve as joint Honorary Secretary of the Fund until her death some 14 years later.

With the aims of advancing the Fund's work, Edwards largely abandoned her other literary work to concentrate solely on Egyptology. In this field she contributed to the ninth edition of the Encyclopædia Britannica, to the American supplement of that work, and to the Standard Dictionary. As part of her efforts Edwards embarked on an ambitious lecture tour of the United States in the period 1889–1890. The content of these lectures was later published under the title Pharaohs, Fellahs, and Explorers.

After catching influenza Amelia Edwards died on 15 April 1892 at Weston-super-Mare. She had lived at Westbury-on-Trym, Bristol since 1864. She bequeathed her collection of Egyptian antiquities and her library to University College London, together with a sum of £2,500 to found an Edwards Chair of Egyptology. 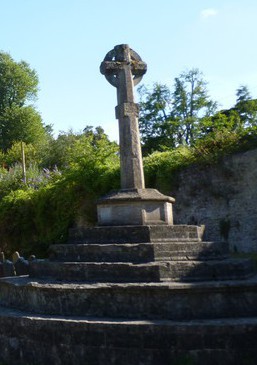 Obviously there is the large war memorial just inside the churchyard. However in addition there are war graves in both the church's churchyard extension and its detached Church Cemetery. The former holds the graves of three soldiers of World War I and one of World War II, the latter those of four soldiers and a Royal Air Force officer of World War II.

We are located at:

Safeguarding supports everything that we do

If you have a concern that you wish to report, please contact whichever of the following you feel is most appropriate.